**Editor’s Note: I found this post I wrote for a friend’s private travel blog 2 years ago this month. It was a fun trip down Memory Lane! So here is a look our 2014 and 2015 trips to The Texas Renaissance Festival as written in 2016! (Photos are from the 2014 trip. Jamie was much faster on the 2015 and we had less photos.)

Some of my favorite memories with my husband, and now The Young Explorer, has been at the Texas Renaissance Festival, or TexRenFest, held in October and November each year. We are really hoping to find time to go this year.

According to their website, “The Texas Renaissance Festival is the nation’s largest, most acclaimed Renaissance themed park. Each year, over 500,000 guests pass through the Festival’s gates and enter the magic of New Market Village, an authentically recreated 55 acre 16th century English township located 50 miles northwest of Houston, Texas.”

I didn’t go to my first TexRenFest until I was in college. It was a popular activity at Sam Houston State University since it was only a small drive away. The Texas Renaissance Festival after graduation, I went with my (now) husband and met a group of friends from the SHSU ROTC program there. We had a blast for sure.

The guys had quite a bit of fun jousting and “drinking as much mead as possible”. It was entertaining to say the least, though they did turn into the classic “rowdy college guys” by evening.

Though we moved away, we continued to go whenever Army life allowed us. When The Young Explorer was 4, we took him to the TexRenFest for the first time, and it was almost as if we were going for the first time as well. There is certainly a difference when you experience something as a college student than when you do as a parent. 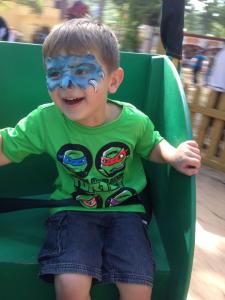 We’ve been to the TexRenFest twice as parents. The Young Explorer’s excitement over face-painting along was entertaining. For the first time, we rode rides and explored all there was to see. The jousting was so much more fun through the eyes of a 4 or 5 year old. One the first visit (2014) he wanted to get a (wooden) battle-ax because so many people were dressed in character, and the second time (2015) we planned ahead to bring it so we wouldn’t have to buy another one.

The Young Explorer is a picky eater by most standards, but he sure ate his weight in food on both of those trips! 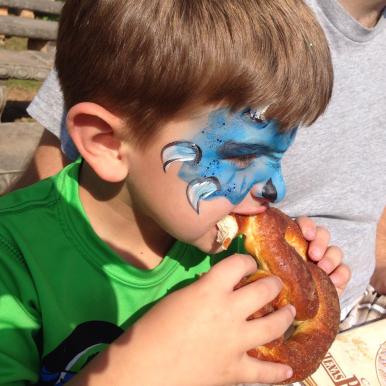 There are so many people walking around as characters, from time period costumes to fairies and warriors, everywhere you look there was something new and amazing to see.

For me, I just love looking around at all there is to see. I love exploring the shops, though it can be a little hard for The Young Explorer with all the excitement happening. I am also in absolute love with all the flowers and plants in bloom. It’s absolutely amazing to see them in October and November after a long HOT Texas summer.

One thing that you can do that the TexRenFest is camp. There are places on the property where you can camp out and be completely surrounded in the adventure, mixing and mingling with other camps.

Our goal is to one day camp, as well as attend the King’s Feast. The King’s Feast is two hours of feasting and frivolity with the Bordello Sisters, an all you can eat wench served feast with endless flagons of wine and ale provided in a limited edition commemorative drinking vessel. Who wouldn’t want to do that!?! 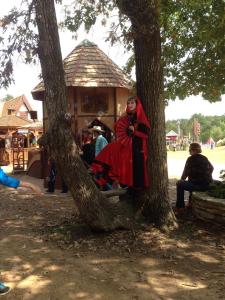 All in all, The Texas Renaissance Festival is something that should be on everyone’s bucket list! The food, fun, pageantry and games offer an amazing place to make memories whether you are there with friends or family.

This year the Texas Renaissance Festival opens TODAY (Sept. 29) and runs each weekend through November 25. You can visit them online for tickets and more information. Each weekend features a different theme, so you’re sure to have lots of fun. Maybe we’ll see you there!!