This week’s post is a day late because I wanted to share something with you this week about something that Jamie has been working on for 3 months and LAST NIGHT we saw the rewards of his efforts!

In late April when I started planning activities for the summer I stumbled across a local Theater School. After some back and forth (with myself mostly) we decided to enroll Jamie in a theater class of Disney’s Lion King. Now I have to admit, we have known Jamie was born to entertain for quite a while now. Quips and comedy comes pretty natural to him. This is a conversation from when he was 5 …

Yeah … so at that point and even now, he is an only child. So i didn’t really need that much information.

As a toddler through 1st grade he had been offered the chance to be in several commercials and company training videos, for the most part without us seeking them out. Last summer (2017) we signed him up for a local church’s summer music camp because he missed all the VBS programs while at science and Cub Scout camps. He was excited to have dialog but was clear he did not want a solo, so he was cast as the parrot for a pirate themed program. I made him a quick costume and her became Petey the Parrot …

He was supposed to just be a supporting character with minimal lines, but he hammed it up and afterwards we had 7 or 8 parents come up to us and tell us that he was hilarious. As a “behind-the-scenes” person, I wasn’t sure how to feel about our budding comedian. Despite that, at the end of second-grade we learned that all the classes were going to combine for a talent show. He decided he wanted to do a comedy routine, so I helped him write a monologue and he performed it a week later. It wasn’t open to parents, but it was posted on his class SeeSaw account, so we were able to get a copy and post it on the Mom Approved Adventures Facebook page.

That really helped him get excited about theater classes, so we registered him with The Purple Box Theater in Friendswood, Tx for weekly classes which culminated in a 3-night showing of The Lion King.

I admit, I was nervous at first. He gets excited about a lot, but the newness wears off and it’s usually a fight to get him to follow through and finish. If arguing with your child burned calories, I’d be so skinny, right now. He’s really only ever stayed excited about Cub Scouts. Soccer, baseball, basketball, even karate have all resulted in a lot of “I don’t want to do this anymore” once he realized that it doesn’t come naturally and requires work. Though to be fair he has stuck with karate for 2 years because we are able to take a summer and winter break in the program we use.

So we embarked on our Disney The Lion King Kids Musical journey with one of us excited (Jamie) and one of us scared (Mommy), and one of us was sure that it was going to lead to discovering a life long passion (Daddy). 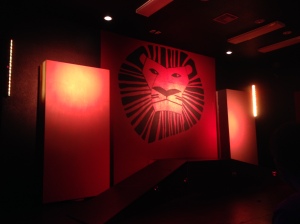 I have to say, of the 3 months of practices (is that what it’s called in theater?), we have only had a few huffy moments when it’s time to leave the house, mostly when he was deep into Minecraft and didn’t want to pause it. There were only 2 “I don’t want/I can’t do this moments when he received some constructive note from his teacher (or is it coach? Director? Is there a Theater Mom handbook?)

He spent all week telling his classmates about this weekend’s shows and on Friday has me write down the show times for them. One mom even contacted me to find out where to get tickets. So he’s excited. We’re not sure how it will play out during the school year because the class for his age group meets the same night as Cub Scouts and that’s a 3 more year commitment, but we’ll see.

I will admit when we saw his first show last night, I cried a little. It was so amazing to see how all of his hard work was paying off. He seemed to really enjoy it. Afterwards, he seemed to have a confidence and excitement that he didn’t have in other extracurricular activities. I would certain encourage you to try theater if you have a child who seems to have an interest in it. You can start with a class or camp, even a church program, because you never know how even a little bit of a taste for theater can help teach valuable lessons like teamwork and confidence, even helping with public speaking and focus.

Encouraging your child(ren)’s passion is so important for both children and parents. We love The Purple Box and are sure to be back for more classes when we get our schedule sorted. Here are some photos from last night’s performance, I tried to get a few without too much detail of other children.